I was checking the recent posts on Facebook and saw a post titled:  Craftsy Free Class Day!  I decided to look into it and ended up taking a class from them titled:  Scrap Quilting: Waste Not, Want Not.  Pepper Cory was the instructor and she added in all kinds of little tips that she had learned over the years as she her has made quilting her life's work.  Her class lessons included: The Patchwork Travel Pillow, Puss-in-the-Corner Quilt Top, Phone Book Quilt Top, and Log Cabin the Verb Quilt.  She also included two bonus lessons of  Stenciling & Sharpening Your Rotary Cutter.  I fully intend on getting a sharpener for my rotary cutter as well as a few extra blades.  It was nice to see just how easy it was to sharpen your rotary blade.

As of yet, I have only made the first project The Patchwork Travel Pillow.  I modified my material selection somewhat from hers because I wanted to put a flower as the center of mine,Mine wouldn't be a travel pillow as I would be using them on the two pillows I had on my sofa that didn't match my decor any longer.  One of the tips that I really liked was to put the pins inside of the place that you are going to pin, instead of on the outside pointing in!  As I had grown up learning from my mother, who was a sewing wizard and made many a dress for me, I had previous pinned on the outside.  I used this inside pinning on my pillow and didn't have to remove the pins as I sewed, because they weren't in the quarter inch seam line! 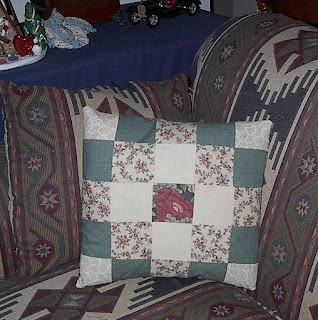 I managed to get all the seams to line up perfectly that way and am very happy with the results.  I made an identical one for the other side of the couch and I just love them!  Now my husband wants me to make a cover for our coffee table using the same pattern.  Our cats, that haven't be de-clawed, get sort of rowdy in the house chasing one another around and have managed to scratch it up pretty good.  I'll have to think about how to do that.  Oh and he wants one for the table at the end of the couch too!  it's covered with a dark blue table cloth that really doesn't match anything.

The other project in the class are also quite interesting and I think I will go back through each class again before starting each one.  I love the fact that I can watch the classes over and over a many times as I want and at any time of day!  After sharpening my rotary cutter, I think I will try the Puss-in-the-Corner Quilt Top.  I have seen several of these done while watching Bonnie Hunter's blog, which I really love.

Off to another adventure, Tami C.


I really have no idea where to start, but I've been encouraged by reading Bonnie Hunter's blog for the past several weeks:  Quiltville's Quips & Snips!! and decided to start keeping a record of my quilting adventures and how I got there.   I  have been collecting a little material here and there for quite a while now.  My mother-in-law made this log cabin quilt and gave it to my husband and I for Christmas. 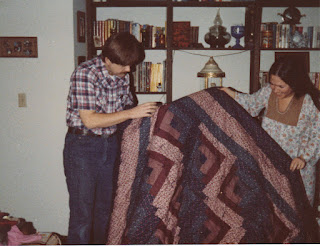 We had moved from Colorado to Nebraska by then, so it was a very welcome gift and had really stirred my interest in quilting.  At least I think that this was where it started.  We would go back to Colorado almost every year for a visit and I managed to sneak in a trip to Ruth's Stitchery in Colorado Springs, which was my mother-in-law's favorite quilt store.  I would always get a little something, usually a couple of fat quarters or a cross stitch pattern.  At the time, I was more into cross stitch and crocheting, but we loved going there.

After several years we moved to Texas as my husband had taken a job as Chief of Police at a V.A. Hospital and I took a position as a programmer at a local college.  Having moved further away meant that our trips back to Colorado didn't come as often, but we continued our little trips to Ruth's.  After living in Texas for ten years, we decided we wanted to move back to Colorado.  We decided that whichever of us got a job first, we would be leaving.  Well, I was first to get a position at Regis University in Denver, so we were on our way!  Our trips to visit Ruth's Stitchery were coming much more often, but I still didn't have the time to really take on a quilting project.  My project boxes were getting fuller and the number of them were growing!

I left Regis and went to work for the City of Westminster where I found a few people that also quilted.  They had some really beautiful things and it was then that I decided what I was going to do when I retired.  I was going to quilt!  Well, it was a little over ten years later before I finally retired and guess what I'm doing....

I have started quilting!  My very first quilt was one that I made for my husband's birthday.  I finished up hand sewing the binding on the night before his birthday.  He insisted that he wanted my name and date on it. 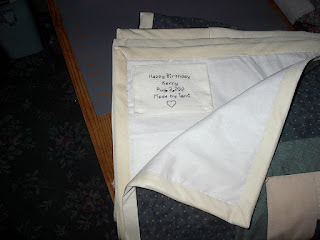 So, that was the last thing I did.   At least I thought it was.  He later said that he wanted pillow covers to match, so back to the sewing machine.  Almost finished with those and my Singer stopped singing!  I spent hours and hours browsing the Internet and reading reviews until I finally found a machine I liked that had the options I wanted and cost I was willing to spend.  I ended up ordering a Brother and had to wait for it to arrive.  I was then able to finish making his pillow covers to match his birthday quilt. Popeye loves them! 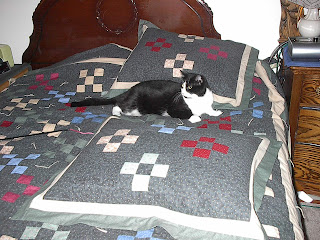 So..... Here it is!  Popeye was my helper all during the work on my first quilt and kept a close eye on every step. 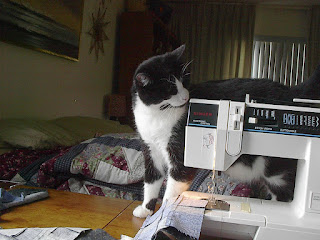 He watched closely as I was putting the last bit of love into the quilt & made sure that I was getting it done. 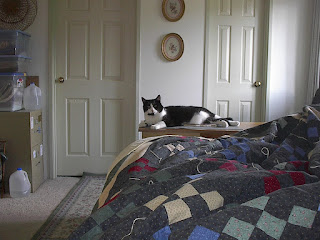 This was the very beginning of my quilting adventure.  I had made a queen size nine patch quilt with alternate squares.  I was very happy to at last start using all of those pieces of material that I had been picking up over the years.  This entire quilt was made with material I already had on hand including the batting and backing.  Some I had purchased and some were hand-me-overs from my mother-in-law.


Off to another adventure later...  Tami

Tami C
I am a recently retired software engineer who is taking advantage of being retired to now pick up quilting. I have a 43 year old daughter & a 25 year old grandson.